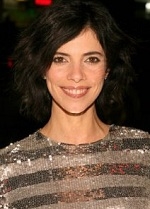 FESTIVAL GUEST - Maribel Verdú
We are overjoyed to announce Spanish Actress Maribel Verdú as a guest of this year's festival. Celebrated in both Spain and internationally, Verdú has captivated audiences in films such as Y tu mamá también, Guillermo del Toro's Pan's Labyrinth, Lovers (Amantes), Belle Époque, The Blind Sunflowers (Los girasoles ciegos) and recently in the critically acclaimed Blancanieves. Maribel Verdú will grace our screens in two films at this year's festival: the riveting thriller THE END, as well as the tender and touching drama 15 YEARS + 1 DAY. Not only will Verdú will be in attendance at Opening Night in Sydney at Palace Verona, but special screenings in Melbourne, Sydney and Canberra will be followed by a Q&A session or be introduced by the actress herself. Be sure to book your tickets fast as these sessions are sure to sell out!